When they released Power Rangers: The Movie, there was quest to find new powers, after their old ones were destroyed.

In the end of the movie, the Rangers were powered by the spirit of the Ninjetti.

When the next season opened, it looked like the movie was not part of the continuity, and the rangers had to go on a similar (but different) quest for their Ninja powers.

I made these as my first real popular prop, and these have sold well over the years.

But, as with anything, there is a time to move on, so at this time, I’m not making these anymore.

Other prop makers have made these as well, and the demand for these has faded, so I decided to retire them. 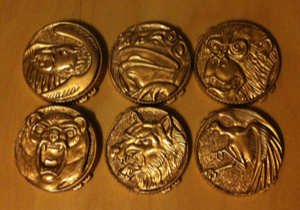